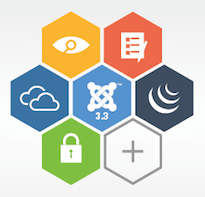 As we have already informed that new version for Joomla is out which is 3.3 and as we promised, here is the post that tells what is new in this new version of Joomla? We were very excited for this particular release and Joomla community didn't disappoint us. Some of the very good features are added to this version of Joomla for which we were waiting since long.

So what is new in Joomla 3.3? Mainly, new most awaited and very useful features like micro-data for better SEO, improved password hashing, optimization in code of routing system in order to improve performance, New enhanced jQuery and most important cloud storage API.

Microdata library is included in this release so that will help search engines to be your friend and search your site quickly.

With the new minimal requirement of PHP version 5.3.10 itself increased security factor Joomla. Apart from that, this new version also got 2-Factor Authentication, stronger password encryption.

The new Cloud Storage APIs will maximize the usage of your cloud data subscriptions by connecting them with the Joomla core. All major cloud service provider APIs like Amazon s3, Google Cloud Storage, Rackspace and Dropbox is added.

New rewrite in jRoute system will make Joomla websites faster and possibility it will speed up your website up to 10%. So not your customers, search engines will also love your faster Joomla website.

From Joomla 3.3 onward, a jQuery library is now included in the CMS core, and Joomla core will be jQuery only. This will lessen the number of script conflicts.

Highly recommended Pixel Perfect PSD to Joomla Template service provider.. Used them a couple of times for complex designs and they came up with the best work.

Awesome work done by Joomladevs with quickest turnaround time... Placed an order and send the PSD and I got my Joomla template within 10 hours. Are you guys machines? I checked the code and I'm very much impressed with the work quality as well. Kudos to you guys, hats off!

I needed 24 Hours Turnaround time for a complex PSD to Joomla Template Project and these guys did it.. Quickest Turnaround time with great quality of work. Salute you guys, keep up the good work. A++

We have been using JoomlaDevs since long and they never gave us a chance of disappointment. Highly Recommended Joomla Service provider for outsourcing firms. Well Done guys.

We have been using these guys since 11 months now and very happy with the quality and professionalism. My all Joomla clients are very satisfied with the outcome. Thank you guys.. You deserve no. 1 position in this list.

Amazing developers and great UX designers.. I just loved their creations that they have created for my business. I am already seeing a boost in conversation within 25 days. Fast workers and polite support. Keep up the best work guys, you deserve to be on top of this list.

35+ Joomla Projects in approx 20 Months and it's going on.. We feel blessed that we found an outsourcing partner partner JoomlaDevs. Very reliable Joomla Development Company.

Guaranteed 24 hours delivery.. I loved this guys. Quickest on the earth. Will use them again for urgent project. Thank you JoomlaDevs, you guys are awesome. I am impressed with English too.

Perfect Joomla Development Company for overseas companies who believe in outsourcing. They provided me best backup while I was away on vacation. Great Quality and my clients are very happy with their performance.. Thanks JoomlaDevs!

Best ever Joomla Development company I've worked with... Spot on development and great communication. Will definitely work with them in future for my upcoming projects.

I have tried a couple of other providers in the last 4 months but had horrible experiences. Then one of my friends introduced me to JoomlaDevs and they created their impression from the very first project. In the last 2 months, we have completed 4 projects and I am really stunned looking at their professionalism and quality coding. Highly Recommended Service to everybody…

Just one word "Awesome" is the best way to describe the Joomla services provided by Joomladevs team. I contacted several companies but most of them told it's not possible to implement with Joomla but Joomladevs guys made it possible for me. Thank you Joomladevs again! Highly Recommended Service provider!

I got an urgent assignment but I was busy with another project and could not say NO as he is my regular client. Contacted JoomlaDevs and within a fraction of seconds I got reply and quotation, I gave go ahead and I got the template within 48 Hours! Are these guys machines? Franking Awesome! Highly Recommended Service…

I am very happy with the Joomla 3.x template that they have designed and programmed for me. I used rocket theme templates in past which I found hard to upgrade and hard to modify sometime when we have customizations to do but now I think, I will use these guys again and again for my need. Keep up the good work guys and you will have lots of work from us.

I would like to say amazing! I am really surprise when I see, they completed the job within 24 hours and without a single mistake. Awesome! Highly recommended PSD to Joomla service provider. Fast communication is a plus point.

Excellent Service and Great Support. Even after 3 months, they replied my questions quickly. What else do we need? Thanks Guy, you deserve 5 stars…

Great work done by these guys while I am on holidays. They provided great back support and coding standards and turnaround times are great as always. Glad to have such reliable outsourcing partner like JoomlaDevs. Keep up the good work... Highly Recommended.!

Fasted PSD to Joomla service provider.. I had an urgent project and I got my Joomla template within 24 hours. Awesome work guys, neat and clean code. Thanks again!

I will say "JoomlaDevs" are my find of 2013. Great Communication, Great Turnaround and Great Quality of code. They won me and I will definitely have some more work for them in near future. Keep up the good work guys.. You are just great!

Overwhelmed with prompt responses and prompt delivery. Coding was excellent so I will call it a perfect execution of project within short notice period. Thanks guy

These guys should be at the top of the list, they are the best! I highly recommend them and we use them a lot on complex projects.

Quickest PSD to Joomla Service provider I came across till date. Quality of code is good too.. So highly recommended workers. Thanks guys for getting this job done for me quickly.

We are Specialists, Passionate, Reliable, Experienced and HONEST...